Song of the Dryad by Natalia Leigh 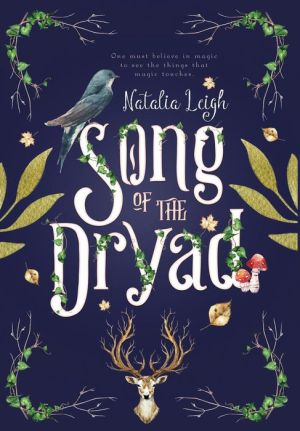 Song of the Dryad by Natalia Leigh Seventeen-year-old Charlotte Barclay is still haunted by an encounter she had eight years agoa run-in with a fairy beast that had eyes like witchlight and a taste for flesh. Charlotte has avoided the Greenwood ever since, pretending fairies dont exist and choosing instead to focus her energies on graduating from high school and perfecting her audition piece for the Bellini Institute. However, everything changes when her mom goes missing, kidnapped by the fairies that haunt the forest behind Charlottes home. When Charlottes search for her mom leads her into the fairy realm, she discovers that she hails from a line of Shrine Keepershumans tasked with maintaining ancient fairy shrines. Charlottes family has failed their duties to the fae, and now she has no choice but to strike a deal with the dryad, a powerful tree nymph responsible for her moms disappearance. But the dryad only gives her a month to complete her task: retrieve five stolen fairy stones and return them to the fairy shrine. If she doesnt return the stones in time, the dryad has threatened to imprison another of Charlottes loved ones. Charlotte dives into a world as magical as it is deadly, coming face-to-face with fairy creatures that never get mentioned in the story booksincluding the creature that haunts her dreams. She must embrace her task and conquer her fears, or else shell never see her mom again.